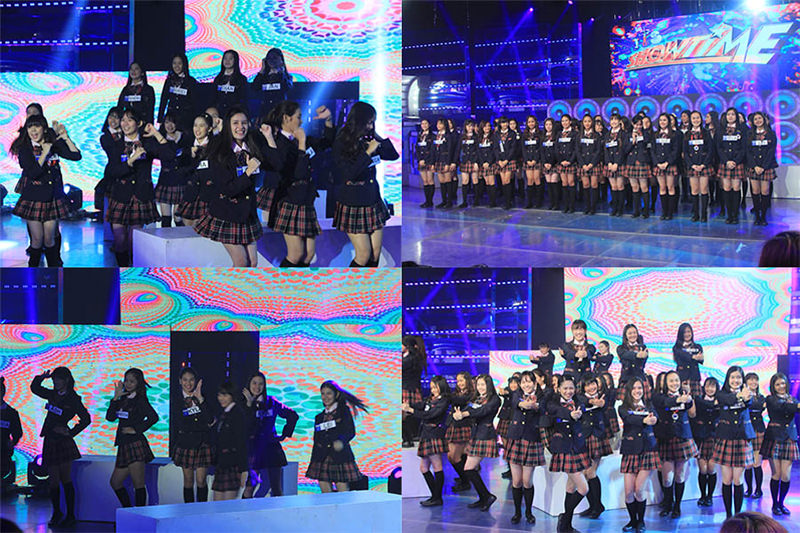 MNL48 finalists exert extra effort as they get closer and closer to finding out the first generation members of the first idol group in the Philippines.

For almost three months of MNL48 on It’s Showtime, the girls have proven that they already got not just idol-like performances but also the characteristics of being an idol during their trainings on their journey to Final 48.

Last week, the audience and the coaches enjoyed watching them grove to the beat of AKB48’s hit song Aitakatta wearing their uniforms. This week, the viewers have seen their genuine smiles and inspired faces as they performed another AKB48 song, Koisuru Fortune Cookie in the noontime show today.

After the feel-good dance performance, everyone was saddened by the announcement of the sudden back out of MNL48 consistent top rankers Eunice and Aria, who decided to focus on their family and studies, respectively. To complete the 48 girls, challengers Mari and Belle were chosen based on their ranks to be officially part of the Top 48.

The Top 3 were also chosen based on their personal scores since the beginning of the competition. Sela, Abby and Trixie got the highest overall scores from the ABS-CBN and Hallo Hallo Entertainment executives and staffs, coaches, advisers, and the madlang hurados.

Beginning today, the girls have one week left before the General Election on April 28. Voting will officially close on April 27. So the aspirants are thoroughly campaigning to be part of the Top 7 to have a chance to train with AKS in Japan, the talent agency who handles AKB48. To be the center girl is the most desired position in MNL48 because she will be the face of MNL48 worldwide.

Meanwhile, MNL48 will be having its first big event, the “Meet Your Oshi” event on Sunday, April 22, where the finalists will perform in front of the public for the first time at Trinoma Level 4 Park. In addition, fans will have a chance to meet and greet their Oshi.

Watch the MNL48 Online Update weekdays, 6pm and stay updated on the MNL48 website and social media accounts to get the latest updates on the upcoming General Election.